Arborvitae populate many lawns in Michigan—favored for their privacy benefits and year-round greenery.

But just because these shrubs don’t lose their foliage in the cold doesn’t mean they’re built for the intense winters Michigan brings.

As evergreens with a distinct shape and structure, arborvitae face a couple of risks during the winter.

For one, there is the age-old problem of deer.

Many homeowners are used to protecting their gardens from these critters, but they forget that their larger shrubs are vulnerable too. Arborvitae are clearly not first choice on the menu (or else they’d vanish immediately), but as Michigan winters drag on and deer become desperate, those tall green plants begin looking more appetizing. So is there anything you can do to protect your arborvitae from becoming a midnight snack?

You have a couple reliable options. You can invest in building a fence around your shrubs, using either wood or netting—as long as it stands at least 8 feet high. Admittedly, this is not a viable solution for everyone, as it can become quite expensive and some associations simply prohibit fencing. This leaves you with the cheaper, more temporary remedy of burlap.

Wrapping your arborvitae in burlap will not only keep the deer out, but will also address the second greatest threat Michigan winters pose: snow damage.

Arborvitae’s signature tall, narrow structure makes them a popular front-of-house shrub, often planted right against the siding of the house.

As snow collects on your roof, however, this makes your arborvitae a prime target for the clumps that inevitably fall. While trees and shrubs with wider crotches can withstand the impact of these snow piles, the narrow branch unions of arborvitae are more brittle and likely to break apart when snow lodges between them. Snow-induced breakage can also happen to arborvitae located far from buildings—the gradual accumulation of snow can be just as harmful as a sudden impact from a nearby roof.

Covering your arborvitae in burlap will prevent the build-up of snow between the fragile branch unions, protecting them from undue pressure.

While it may sound a bit archaic, using a protective cloth really can make a difference in your arborvitae’s chances at winter survival. So before you start seeing nibble-marks or sagging branches, you might want to bust out the burlap. Doing so will help keep your arborvitae full and green year-round. 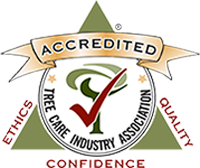